How is pain and suffering calculated in a car accident case? 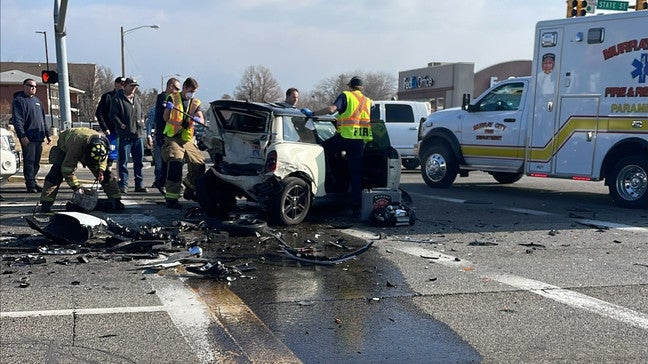 Let's look at a relatively simple example.  Let's say you lose a leg in a car crash when you are 30 years old employed as a framing carpenter.  Economic damages in this example are relatively simple to figure out.

The past medical costs add up quickly including the care necessary to save your life and to place you in the best position possible given your injuries.  These costs typically include ambulance, hospitalization, radiology, surgeons, anesthesiologists, physical therapy, rehabilitation, and prosthesis.  These past medical costs may well add up to, for sake of this example only, $200,000.

Future medical costs are those that will be necessary because of your injuries.  A state-of-the-art leg prosthesis may cost $30,000 and as high as $70,000. Prosthesis need to be replaced about every three years and costs, presuming a state-of-the-art prosthesis, about $20,000.  Life tables tell us you will probably live until you are about 75 years old.  If you are 30 at the time of your loss, that is another 45 years, or 15 prosthetic leg replacements.  Future medical costs for the prosthesis alone approaches about $350,000.  This cost does not consider advances in prosthetic improvements we have all witnesses over the decades.

Past lost income is income lost directly because of your injury.  As a framing carpenter in the State of Utah let's assume you earn about $40,000 per year.  When injured you are in the hospital and obviously not able to work.  Let's say you cannot work for one year.  You would lose $40,000 in past lost income.  That is not the end of the story though.  You have also lost benefits—let's add another $10,000 in benefits.  You total past lost income would be $50,000.

Future lost income is income you lose because of your injury.  You may return to work as a framing carpenter and need to be reeducated sometimes earning more than a framing carpenter in which case there would be no lost income.  However, someone has to pay for the reeducation and often reeducation is unsuccessful.  It is often not successful because people are not automatons and have life issues to deal with—more on this later.  For sake of this example let's assume you are successfully reeducated and earn a like income of $40,000 resulting in minimal lost income.

Other monetary loss includes any costs that result as a direct of your injuries.  With a leg amputation and while you are in the hospital you may have to pay people to care for your home—cutting the lawn, paying bills, etc.  These costs are usually minimal but sometimes add up depending on what interruption your injuries visit upon your life.

The legal system defines these losses in part, including:

Let's carry on using our example of a young man, 30 years old working as a framing carpenter who loses his leg in a car accident.

The nature and extent of injuries:

Losing a leg is a dramatic loss.  You may respond that people with a limb amputation can get along just fine in the world but there is no disputing that losing a leg, because of someone's negligent act, may be life changing.  Ask any person, would they rather have their leg or have their leg amputated?  What about a “jobs wanted” advertisement that asks you to be injured in a car crash, be hospitalized, experience rehabilitation, and lose a leg?  How much are you willing to take in “wages” to accept this “job?”  The loss of a leg is an extensive injury.

The pain and suffering, both mental and physical:

When people talk about pain and suffering they often think of only physical pain.  Acute physical pain is one thing.  The pain you feel when you are in a car accident, the pain while ambulance personnel get you into the ambulance, the pain of being worked on in the emergency room.  This acute pain is bad but it is fleeting—although it does not feel that way in the moment.

Nonetheless this acute pain passes.  Often the pain visited upon the victim of a car crash turns from acute transient pain, into chromic pain.  Using our example of a leg amputation after a car accident consider the pain of wearing a prosthesis—for the rest of your life.

The extent to which the injured party has been prevented from pursuing their ordinary affairs:

The degree and character of any disfigurement:

We all like to think that we live in an enlightened society and treat all with equal dignity and respect.  While that is the ideal we all know that people are treated differently depending on how they look.  Ask any obese person, ask any stunningly beautiful person, ask a celebrity, or an ordinary person if they are treated differently.  Now ask the person who has lost a leg.  Ask the amputee while they are walking on the beach in their bathing suit with their prosthesis on full display.

The extent to which the injured party has been limited in the enjoyment of life.

A 30-year-old man who loses his leg and must wear a prosthesis to get around without the prosthesis is obviously limited in his enjoyment of his life.  He may, with time and extensive rehabilitation, return to work and fall in love, and have children but all the while without his natural leg.  Ask yourself if it is the same.

Whether the consequences of these injuries are likely to continue and for how long.

Once you tie in the rest of the non-economic damages a reasonable value for our example case may well approach $5,000,000.

Although non-economic damages are not capable of being exactly measured, and there is no fixed rule, standard or formula for them, a reasonable way to calculate pain and suffering is to base it on the past and future medical costs and then multiply that figure by three.